It has been argued that “no problem in judgment and decision making is more prevalent and more potentially catastrophic than overconfidence”, with Nobel laureate Daniel Kahneman going as far as stating that if he could eliminate just one judgement bias, overconfidence would be his choice. Most notably, Dunning and Kruger have shown that there is little to no correlation between knowledge and confidence, with the least knowledgeable also being more likely to overestimate their skills. This can play a role in misinformation control and science communication in general, as several studies have identified evidence of the Dunning-Kruger Effect (DKE) in highly controversial anti-science movements concerning vaccinations, biotechnology use, and climate change. However, both the original Dunning and Kruger paper and early subsequent work, have been revisited for different reasons including 1) being tested mostly on small populations, often of elite college students, 2) in the USA. More recent criticism focuses on methodological issues, namely 3) ignoring a possible expected regression to the mean effect, and 4) not discriminating between lack of metacognition or just having inappropriate priors. Finally, as knowledge levels often do not follow a perfect normal distribution, 5) presenting these results in quartiles, the common practice, might hide important variance, particularly in the most extreme quartiles, where several knowledge and confidence bins are treated as one.

In this talk, I will present a different methodological and analytical approach to address the above issues. First, regarding measurement, we introduce a new method, based on the premise that “don’t know” versus “wrong” answers to knowledge questionnaires can be used as a proxy for confidence, and we examine how this non-self-reported confidence varies with knowledge. Regarding sampling, we apply our metric to several large surveys, conducted over 25 years in Europe and the USA. We also introduce a new analytical approach, whereby we analyze these surveys over its full range of variability (instead of considering only performance quartiles) and compare their results to the two described models: the metacognition model expectation that confidence should grow linearly with knowledge, and the Dunning-Kruger effect of almost no relationship between the two variables (a null model of zero correlation is also considered), as are different answering strategies.

I’ll discuss the impact of our findings in the broad field of overconfidence studies, in the context of science communication, and considering current methods of data analysis in social psychology. 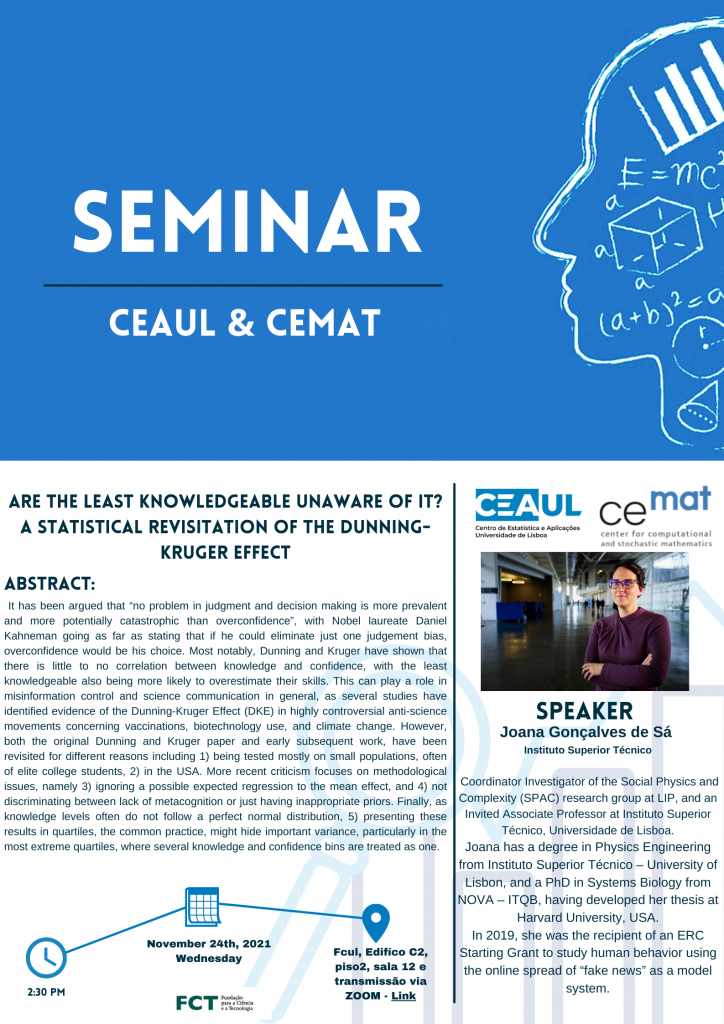